All these are bearish signs that indicate the continuing price correction displayed pioneer cryptocurrency.

How Low Can Bitcoin Price Go

Bitcoin has dropped 18.25% from the November 10 all-time high (ATH) above $69,000 to the current price around $56,762. This price action has created a descending parallel channel on the four-hour chart with the Bitcoin price being continuously rejected by the middle  boundary of the channel.

BTC price is facing immediate resistance from the $57,500 level. Flipping this level into support is crucial for BTC reversing the downtrend.

A decisive bullish breakout will be seen when BTC overcomes the resistance posed by the middle boundary of the falling channel at $58,941 confirming a bullish breakout. After which a rally to new ATH at $71,075 which is the target of the governing chart pattern will be next logical move. This will represent a 25% upswing from the current price.

The position of the RSI in the oversold region points to a trend reversal which validates BTC’s optimistic outlook. 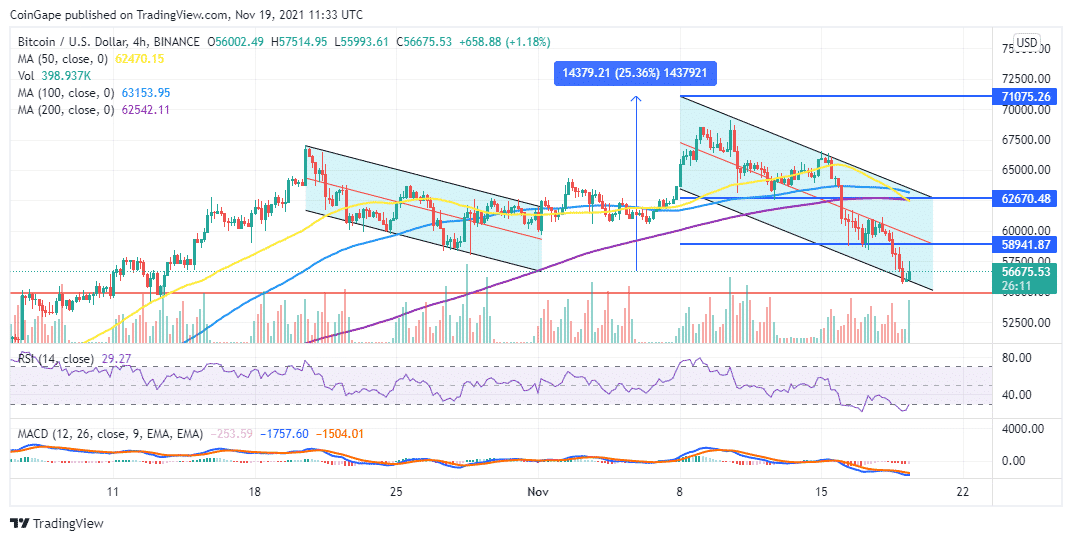 Failure to break rise above the $58,941 level could see the big crypto drop to tag the lower boundary of the prevailing chart pattern at $55,134. If this support level fails to hold, BTC could drop further reaching towards the $52,500 support wall.

The down-sloping moving averages and position of Relative Strength (RSI) indicator in the oversold zone suggests that the bears are currently in control of BTC price, validating the bearish narrative.

Moreover, the downward movement of the Moving Average Convergence Divergence (MACD) indicator below the zero in the negative region accentuates Bitcoin’s pessimistic outlook.