Bitcoin has been the leading choice for investors in the crypto space being the first of its kind. However, there is more to why the cryptocurrency is so attractive for investors. The limited supply of the digital asset has secured its reputation as a deflationary asset, making it a great inflation hedge. There will only ever be 21 million bitcoins that will be mined.

BTC mining has now been going on for a little over a decade now. For the first eight years or so, mining activities remained pretty flat but picked up once the 2017/2018 bull market picked up. Since then, bitcoins have been mined at a rapid rate and despite multiple halvings taking place over the years, 90% of the total BTC supply has now been mined.

On Monday, bitcoin officially clocked 90% of its total supply mined. Over 18.89 million BTC has now been successfully mined since bitcoin was first launched in 2009, according to data from Blockchain.com. This number and the rate of mining have led to concerns about an impending supply shock in the market.

As bitcoin grows in popularity, the demand for the digital asset is no doubt going to skyrocket. It is presently estimated that only about 5% of the total global population knows about bitcoin. A recent study showed that 55% of total bitcoin holders got into the market this year alone. As the world becomes one big global village, digital currencies like BTC will see increasing yields. 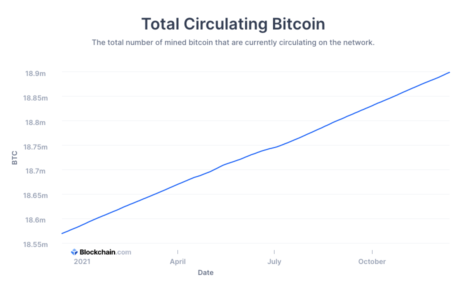 Another reason for an impending supply shock is that investors have no intention to sell the assets that they hold. Most BTC holders have proven to be long-term holders and as they continue to hold on to these coins, there will be less supply left in the market. This dwindling market supply will likely see the price of the asset surge immensely in the coming years.

How Long Will It Take To Mine The Rest?

Despite it only taking about 12 years for the majority of the bitcoin supply to be mined, the remaining 10% of the supply will take almost 10 times longer to mind. This is due to the halvings that occur every four years. Basically, the BTC rewards paid out to miners per block mined are cut in half with each halving. Currently, this number sits at 6.25 BTC paid out per mined block.

With each halving, this number will go down greatly, and it is estimated that the last bitcoin will not be mined until 2140, over 100 years from now. This guarantees bitcoin’s longevity, as well as guarantees continued supply, albeit to a smaller extent each time.

That said, not all of the mined bitcoins will go into circulation. About 20% of the total supply is presumed to be lost forever from people either forgetting their private keys or dying and leaving no way for anyone to access these coins. So, even when the total 21 million BTC is mined, there will never be as many as 21 million coins in circulation, contributing to the supply squeeze.

How to make money with crypto by yield farming

Bitcoin Hashrate Approaches New ATH, What Does It Mean For The Price?