Bitcoin has ran into its fair share of judgement and hate, if it’s from people accusing the blockchain of harming the earth, or countries banning them, we will take a look at Bitcoin’s run-ins and how it has gone through minor setbacks, and major comebacks.

We all know the powerhouse that is starting to raise fresh eyes and debates on the new way of Money. The cryptocurrency was invented in 2008 by an unknown person or group of people using the name Satoshi Nakamoto. The currency began use in 2009 when it’s implementation was released as open-source software. Bitcoin are created as a reward for a process known as mining. Among asset classes, Bitcoin has had one of the more volatile trading histories. The cryptocurrency’s very first big price increase occurred in 2010 when the value of a single bitcoin jumped from just a fraction of a penny to $0.08. Today that same coin is worth around $54k; not many people saw this coming at all as it shook the world, and started the new wave of finance. 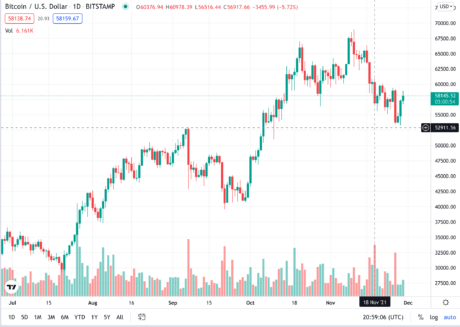 The Up’s And Downs, The Good And The Bad

BTC has faced many ups and downs in years, on top of bans and many tiny setbacks – but still the blockchain has risen. Bitcoin caught a huge break in 2017, when BTC caught mainstream attention; many developments  and media outlets have had some sort of impact on price. People like Elon Musk and Jack Dorsey have had success in garnishing both good and bad press for these coins.

Other things such as Bitcoin halving events, in which the total supply of Bitcoin available in the market declines due to a reduction in miner rewards because of an algorithmic change, have all played a role in price increases. The price of Bitcoin since the May 2020 halving has seen an increase of nearly 300%. Previous halving events in 2012 and 2016 produced significantly larger price gains of 8,000% and 600%, respectively. Among many factors, the halving in the reward given to miners that also doubles the asset’s stock-to-flow ratio seems to have a significant effect on Bitcoin’s price and that is important to know.

Many countries have banned or attempted to ban the mining of these coins as it left a carbon print that is impacting the environment. China has often taken the stance that crypto mining is an “extremely harmful” industry that jeopardizes China’s pursuit of carbon neutrality, as stated by Meng Wei, a spokesperson for China’s macroeconomic agency, the National Development and Reform Commission. On the other side of the coin, both New York and El Salvador have made cryptocurrency and bitcoin a top priority.

This is an ongoing battle, and the outcome and winner will come in the future only time will tell if bitcoin will face another crash or rise

Diving in: Why are 81% of Ethereum’s Beacon Chain nodes in the U.S. and Europe?