Let’s cut to the chase: Glassnode thinks we’re in a bear market. In their latest “The Week On-Chain” newsletter, the company tries to “establish the likelihood that a prolonged bear market is in play” by “using historical investor behaviour, and profitability patterns as our guide.” One thing’s for sure, the recent crash was severe, and “such a heavy drawdown is likely to change investor perceptions and sentiment at a macro scale.”

How severe was it? According to Glassnode, “this is now the second worst sell-off since the 2018-20 bear market, eclipsed only by July 2021, where the market fell -54% from the highs set in April.” Apart from the price, investors “capitulated over $2.5 Billion in net realised value on-chain this week.” Who were those paper hand investors? “The lion’s share of these losses are attributed to Short-Term Holders.” Of course. 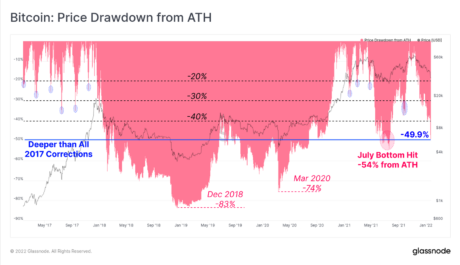 How does this point to a bear market? “Considering previous cycles, such low profitability is typical in the early to mid phase of a bear market (orange). One could also reasonably argue that a bear market started in May 2021 based on this observation.” This is not enough, though. But Glassnode has more.

How does this point to a bear market? “With a current MVRV-Z reading of 0.85,  the market is well within territory visited in bearish markets, and a bearish divergence is noted, similar to the NUPL metric above.” Is this enough? No way. But Glassnode has an ace up its sleeve.

How does this point to a bear market? “The market is now trading below the RTLR price of $39.2k, but above the Realised price of $24.2k. Again, this is often observed during early to mid stage bear markets.”

Who Sold And Who Is Still Holding Strong?

There’s no surprise here. The “Short-Term Holders (STH)” are selling. How does Glassnode define STHs, though? By the age of their coins. “Coins are considered to be owned by STHs when they are younger than ~155-days, and are statistically more likely to be spent in the face of volatility.” No surprise there either.

It’s worth pointing out that the STH’s coins are “currently held at a loss.” In fact, “as of this week, almost the entire STH supply is underwater.” That could be scary for newcomers, so those coins are at risk of being sold. At a loss. These people are going to regret their emotional decisions for life, but that’s a topic for another article. 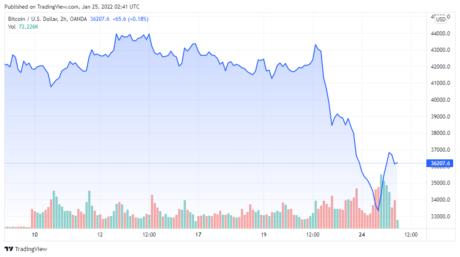 The other question here is, who’s holding strong? According to Glassnode, “Interestingly, STH supply remains near multi-year lows, which is indicative of their counter-part, the Long-Term Holders (LTHs), who appear impressively unfazed by such a severe drawdown.” Of course. People who already understood the game are not easy to shake.

How are the LTH’s coins doing? “Over 59.3% of the circulating supply has now been dormant for over 1yr, increasing by 5.8% of circulating supply in the last three months.” This sounds bullish, but Glassnode finds a way to rain on the LTH’s parade. “Whilst a rising, and large proportion of mature coins is generally considered constructive, it once again bears similarities to a bear market, a time when only the HODLers and patient accumulators remain.”

According to Glassnode, one could argue that the “bear market started in May 2021.” Does it feel like a bear market, though? No, it doesn’t. It doesn’t feel like a bull market, either. We may be in a new phase. The Bitcoin cycle might be dead. Or maybe we’re just in a bear market as Glassnode tried to prove. Either way, LTHs are not selling.