The number of Bitcoin addresses holding more than 1,000 BTC has experienced an uptick. However, the increment in addresses holding 1k+ BTC is not due to whales accumulating, but rather the custodian of Wrapped BTC, transferring Bitcoin reserves to several new addresses.

The increment in Bitcoin addresses holding 1k+ BTC was identified by the Co-founder and CTO of Glassnode, Rafael Schultze-Kraft, who shared his insights through the following statement and chart.

The uptick in addresses holding more than 1,000 BTC is a result of the WBTC custodian moving reserves into a bunch of newly created addresses. 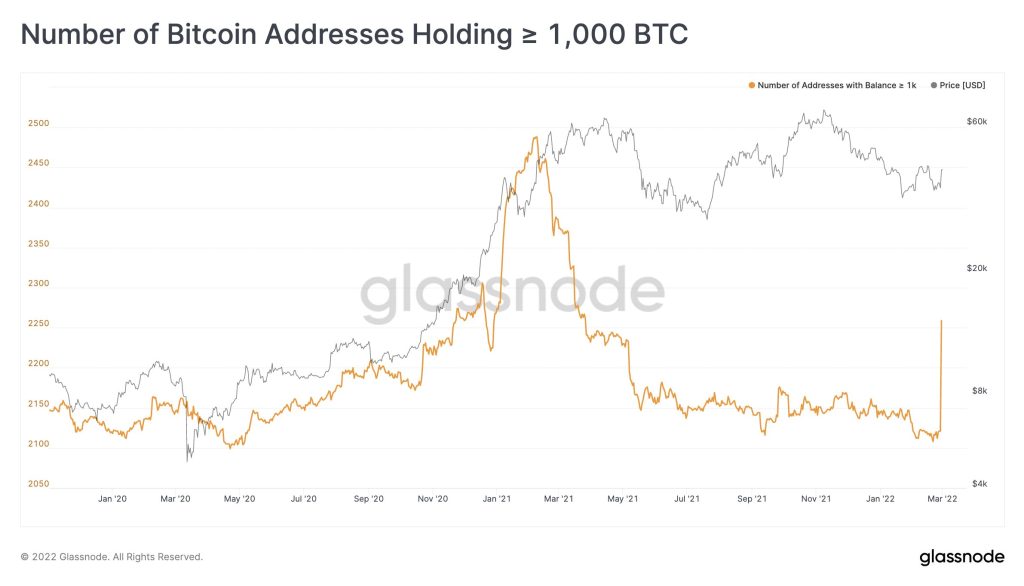 More on Wrapped BTC and its Reserves

At the time of writing, the WBTC custodian currently has reserves worth 260,965.5178 BTC. The funds are distributed in roughly 264 addresses with each holding not more than 2,200 BTC. The Bitcoin is in turn used to back 262,162.3169 Wrapped BTC on the Ethereum network.

The WBTC custodian is also responsible for an additional 100.04 BTC that is used to back 99.89 WBTC on the Tron network. This amount of Bitcoin is only held in one Bitcoin address.

Furthermore, tokenizing Bitcoin’s value on Tron or Ethereum takes advantage of the various attributes of each network such as speed, security, transparency, and lower fees in the case of Tron. Wrapped Bitcoin (WBTC) also eliminates the need for middlemen and intermediaries when moving funds denominated in Bitcoin on the two networks.

Bitcoin and Crypto Showcasing Huge Potential in Times of Turmoil