As per the latest weekly report from Arcane Research, the funding rates have plummeted following a spike around when BTC made a new ATH. Yesterday, they briefly went below zero.

The “funding rate” is a Bitcoin indicator that tells us about the current periodic payments that futures contract traders are making between each other.

When the metric has positive values, it means long traders are paying short traders to keep their positions. Such a situation suggests that the market sentiment is currently bullish.

On the other hand, negative values of the indicator imply short traders are paying a premium to hold their positions. This trend may mean that the market sentiment is bearish at the moment.

Now, here is a chart that shows how the value of the Bitcoin funding rate has changed in the past couple of months:

As the above graph shows, when Bitcoin made a new ATH around $69k earlier in the month, the indicator also showed a big positive spike.

Related Reading | Bulls Giving Up? Massive Bitcoin Bid Wall Removed, What It Could Mean For BTC

However, BTC couldn’t keep the momentum up and the price started falling shortly after. The funding rates plummeted down hard along with it.

Because of this decline in the price of Bitcoin, November 10th observed about $500 million worth of long liquidations.

Many traders seem to have bet on BTC’s price moving further up after its new ATH so they opened new leveraged long positions. But due to the crash, these positions ended up being liquidated.

On November 15th (that is, yesterday), the indicator’s value briefly went below zero. This is the first time it has happened since the end of September.

Currently, the funding rates are just above zero. It looks like balance has returned to the market as there are equal amounts of short and long demands.

However, with BTC’s latest downtrend, this balance may soon shift.

At the time of writing, Bitcoin’s price is trading around $60.9k, down 8% in the last seven days. Over the past thirty days, the crypto has gained 0.3% in value.

The below chart shows the trend in the price of the coin over the last five days. 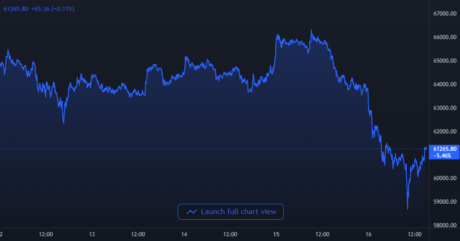