Bitcoin price momentarily reclaimed $60,000 but corrected immediately to re-test the $56,000 level. El Salvador plans to launch a Bitcoin city as it take Bitcoin adoption to the next level.

Bitcoin price has made little progress over the weekend as bulls attempted to recover last week’s losses without success. The big crypto retested the $56,000 support wall after falling as low as $55,396, the lowest since mid-October. At the time of writing, BTC is exchanging hands at $57,430  while it faces stiff resistance upwards posed by the $60,440 and $62,064 supply zone.

El Salvador President Nayib Bukele has been praised and ridiculed in the same measure for making Bitcoin the country’s legal tender and determined to make the adoption a successful undertaking for his regime.

In the latest developments, the Latin American country has taken crypto adoption to the next level with its plans to launch a crypto city. The Nayib administration’s latest ambition with Bitcoin was unveiled Saturday night during the last day of the Bitcoin conference week.

El Salvador’s plans to build a Bitcoin City have attracted partnerships from crypto and blockchain companies like BitFinex and Blockstream. The project will be financed through an issuance of $1 billion worth of tokenized USD-denominated 10-year bonds, according to president Bukele.

Friday and Saturday’s bullish sessions pushed BTC price slightly above $60,000 but this attempt was rejected by the 50-day Simple Moving Average (SMA). A correction ensued on Sunday that has seen Bitcoin retest the $56,000 significant support level.

A closure below this level could the favourite cryptocurrency drop to explore the $54,000 and $52,000 support walls respectively.

This pessimistic outlook is accentuated by the bearish signal sustained by the Moving Average Convergence Divergence (MACD) indicator which is currently positioned below the neutral line in the negative region. This implies that the Bitcoin bears are exerting more pressure on this crucial support. 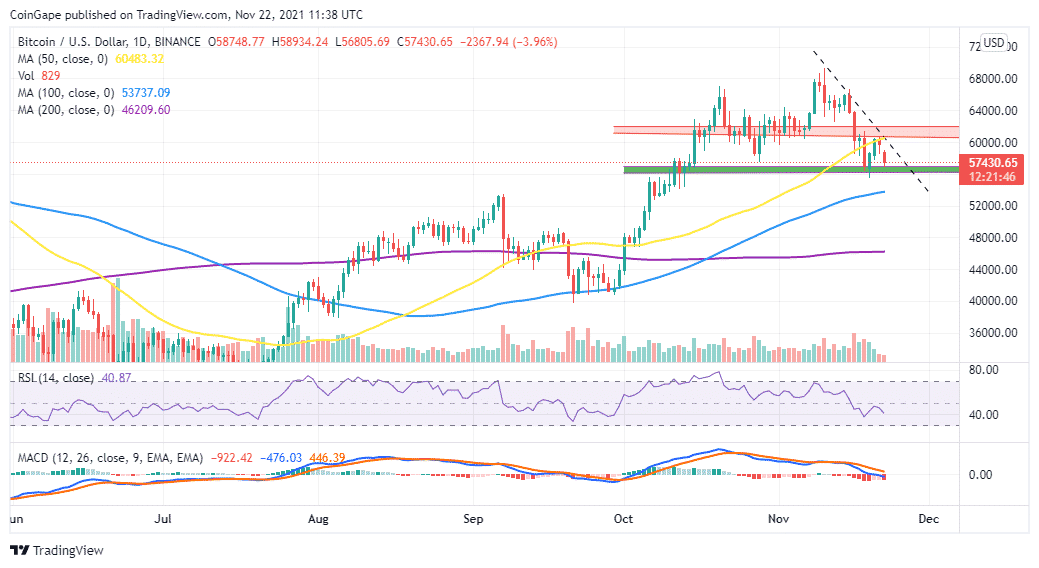 Bitcoin’s bearish narrative can be invalidated if it holds above the $56,000 support level. A rise above the immediate resistance offered declining trendline at $58,694 could see BTC rise above the $60,000 psychological level.

Note that a decisive Bitcoin bullish breakout will be seen when the bellwether cryptocurrency overcomes the pressure from the $60,440 and $62,064 supply zone (red band).

This Bitcoin Metric Hints At Bottom, Is BTC Out The Woods?