Bitcoin price lastest new all-time highs appears to have been triggered by a massive reduction in active supply over the last three months. BTC price outlook is bullish as bulls aim for areas above $83K.

Bitcoin’s (BTC) latest run to new record highs appears to have been triggered by increased accumulation by large holders over the last few months. Bitcoin price is up 3.03% over the last 24 hours to set a new record high at $68,581 during the early Asian trading hours on Tuesday.

This after BTC reclaimed the $65,000 crucial support level on Monday, demonstrating a strong positive market momentum for the big crypto.

Bitcoin Investors Are Not Spending Their Coins

BTC investors appear to eb increasingly ‘hodling’ their coins in hopes of higher prices. This has been illustrated by the inactive Bitcoin supplies which have spiked to a record high 85% over the last three months.

Glassnode, an on-chain analytics provider concluded in its “The Week Onchain Report” released on November 08 that: “Investors are just not spending their coins.

According to the report, “long-term holders” (LTH) – addresses that have not moved their Bitcoin coins over the last 12 ,months were among those accumulating BTC. These addresses are moving only about $6,500 BTC daily.

The accumulation of BTC in the hands of holders is also evidenced by the dropping of the share of BTC supply held in centralized exchanges. This has reached a record low of about 13% as BTC is increased placed into secure wallets.

The Glassnode report also notes that increased whale accumulation was also the fuel behind BTC’s ATH in April.

Bitcoin cleared the last major hurdle in the supply zone (red band) near $67,000 that was standing in its way to new price discoveries. Insights into the price breakout is validated by BTC price action on the daily chart. At the time of writing, Bitcoin is trading at $67,973 with a bullish bias with bulls aiming for a 23% rise to the upper boundary of the ascending channel around $83,460 after which a run to $100,000 will be a possibility. 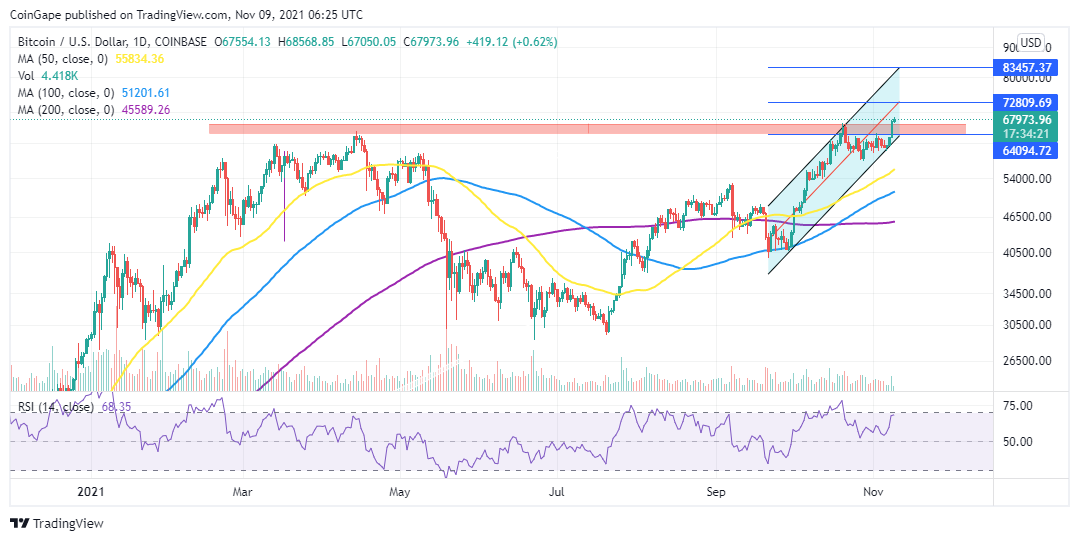 The upsloping moving averages and the upward movement of the Relative Strength Index (RSI) indicator towards the overbought region add credence to this bullish narrative. The RSI’s position at 68.91 is an indication that the bulls are currently in control of the Bitcoin price. And as the RSI enters the overbought zone, more buy orders will be placed pushing BTC price towards the target of the prevailing chart pattern above $83K.

On the flipside, a drop below the $67,000 support wall could see BTC price drop to tag $64,095 support wall embraced by the lower boundary of the rising channel. Bitcoin could take a breather here before resuming the uptrend.