Will the ESG FUD ever stop? As a Congressional subcommittee prepares to take a good look at Proof-Of-Work mining, “more than 70” national, international, state and local organizations wrote a letter to the “Congressional leadership.” In it, they use old and unreliable data to get their point across. They completely ignore all of 2021’s research and progress on the matter, because it would invalidate their argument.

The question is, will Congress buy their poorly researched, alarmist letter? The ESG FUD hit PoW mining like a ton of bricks in 2021. It might be based on a poor understanding of the subject at hand, but the public in general definitely bought it. And they quote the bogus numbers that their authorities invented left and right on social media.

Related Reading | Despite Crackdown, Bitcoin Mining Is Still Alive And Well In China

Also, the whole argument completely ignores Bitcoin’s main virtue. The orange coin provides a framework and tools for the world’s transition to a disinflationary system. Paraphrasing “The Price Of Tomorrow’s” author Jeff Booth, in the inflationary system that we live in, there’s a clear incentive for consumption. If your money’s purchasing power decreases by the minute, everybody will logically buy, spend, and consume everything in sight. That is the real monster that the planet’s facing. And Bitcoin fixes it.

In any case, Bitcoin’s resident ESG FUD expert, Nic Carter, took it upon himself to reply to the ESG organizations that sent misinformation to Congress. Let’s see how each part did.

The ESG organizations come out swinging from the introduction on:

“We, the more than 70 climate, economic, racial justice, business and local organizations, write to you today to urge Congress to take steps to mitigate the considerable contribution portions of the cryptocurrency markets are making to climate change and the resulting greenhouse gas (GHG) emissions, environmental, and climate justice impacts it will have.”

And their accuracies start from the get-go, also:

“In 2018, scientists writing in Nature warned that Bitcoin’s growth alone could singlehandedly push global emissions above 2 degrees Celsius within less than three decades.”

What did Nic Carter respond? That the claim is “false, based on a debunked paper with a completely erroneous model of bitcoin.”

2. bitcoin’s energy consumption will ‘only get worse over time’

most likely will trail off over time, after peaking in the next decade (see https://t.co/8x0koM6nR9 for actually rigorous projections)

Right after that, the ESG organizations even throw Ethereum under the bus:

“The Digiconomist’s Ethereum Energy Consumption Index estimates that the Ethereum blockchain will consume 71 terawatt-hours this year, nearly the same as the energy consumption of Colombia.”

Since the letter is about PoW mining, it makes sense. The Ethereum community seems to have completely ignored the letter, at least over at Twitter. 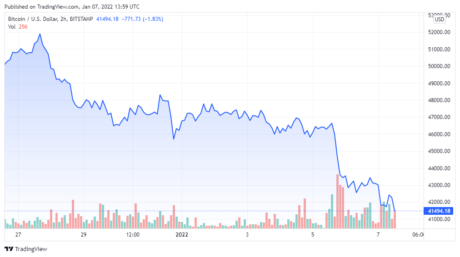 The ESG organizations continue their poorly-researched attack with:

“The GHG emissions from this exorbitant and unnecessary energy consumption is staggering.”

It’s not unnecessary at all. In fact, PoW mining is absolutely essential for a decentralized, permissionless system. And the energy consumption is directly proportional to the security of the network. Plus, it anchors it to the real world. Not to mention the fact that Bitcoin actually incentivizes and finances green energy infrastructure.

Then, the ESG crowd accuses Bitcoin of “exacerbating” the global chip shortage:

“Increased demand for these machines are exacerbating a global shortage of semiconductors. A bipartisan bill by Senators Maggie Hassan and Joni Ernst has called for a report on how cryptocurrency mining operations are impacting semiconductor supply chains.“

With ease, Nic Carter counterattacks with: “Bitcoin miners are not tier 1 clients, they don’t compete with Apple/Qualcomm/NVIDIA for space; the shortage is due to money printing and the demand shock. See section on semis here.”

The Atlas mine brought back online a fallow coal plant (converted to natgas) which now provides energy to the grid (in addition to mining). That’s energy supplied to the grid which wasn’t being produced beforehand

Texas Doesn’t Know What Its Doing, The ESG Crowd Does

“Following a crackdown on cryptocurrency miners in China, many miners are moving to Texas, due to its deregulated grid, taking away the power that Texans need.”

This completely ignores the fact that the state of Texas went to great lengths to attract those miners. And that, unlike the ESG organizations that signed the infamous letter, power companies in Texas regularly attend Bitcoin meetings. They are making an effort to understand the technology and the opportunities it brings to them. Also, as Carter puts it, “Majority of mining is in west texas where transmission bottlenecks mean prices routinely go negative. Huge overcapacity and limited demand for power outside of mining.”

Miners also participate in demand response, meaning they aren’t online when the grid is overburdened. Their presence dramatically improves economics for renewables and does not compete with households during scarcity events.

The state of Texas knows what it’s doing, they see Bitcoin’s future is bright. These ESG organizations think they know better, though:

“Adding more energy-guzzling crypto mining operations to Texas could exacerbate the sorts of blackouts the state already saw during the extreme cold in February — outages that reporting shows hit communities of color the hardest.”

Wow, playing the race card there. So low. And unrelated. Anyway, answering the claim that miners “could exacerbate” the February blackouts, Carter says. “Miners were/ would have been offline during this time, as we demonstrate here. They also help alleviate ‘black start’ issues through primary frequency response.”

The coal waste was going to oxidize naturally. It was going to combust anyway. This is an incentive to clean up a nasty site leeching into groundwater etc. Neutral from a CO2 perspective and ++ from an ecology view

Are these direct responses to the ESG organizations’ letter? It’s not clear, but the authors published them in the same timeframe. The first one refers to SHA256, the set of cryptographic hash functions that Bitcoin uses. Nunchuk founder Hugo Nguyen said, “Once you understand that SHA256 is close to being 100% efficient at what it does, you’d stop calling it a “waste”. In fact, 100% efficiency is the exact opposite of “waste”. There’s nothing else like it.”

Once you understand that SHA256 is close to being 100% efficient at what it does, you’d stop calling it a “waste”. In fact, 100% efficiency is the exact opposite of “waste”. There’s nothing else like it. https://t.co/SLuVrAPfU2

And Kraken’s Dan Held states that “Bitcoin’s energy consumption is not “wasteful.” Why? Because “It is much more efficient than existing financial systems.” And we’re talking orders of magnitude, here. Not only that, “No one has the moral authority to tell you what is a good or bad use of energy (ex: watching the Kardashians).”

1/ Bitcoin’s energy consumption is not “wasteful.”

– It is much more efficient than existing financial systems
– No one has the moral authority to tell you what is a good or bad use of energy (ex: watching the Kardashians)

Do you know how much energy American households use for their Christmas lights? As much as the whole Bitcoin network, that’s how much.

Where is the letter to Congress protesting  Christmas lights, ESG organizations?