Bitcoin jumped to nearly $44,000 this week, amid increased institutional trading and as a large number of tokens were moved off exchanges. Recent data suggests that these outflows could herald more strength for the world’s largest cryptocurrency.

The token is up nearly 7% over the past seven days, with its latest bounce coming just after the U.S. Federal Reserve hiked interest rates as expected. A bulk of this strength has been attributed to institutional trading, with growing interest from major Wall Street firms.

Bitcoin has also managed to avoid the near-term weakness experienced by stocks, after the Fed said it would be more aggressive in its moves to curb inflation. As of Wednesday, it was trading around $42,000.

According to data from crypto researched Intotheblock, the token had its largest exchange outflow in over one month on Monday, with over 15,000 units being moved off exchanges. Historically, large outflows have always preceded a significant jump in the token’s price. 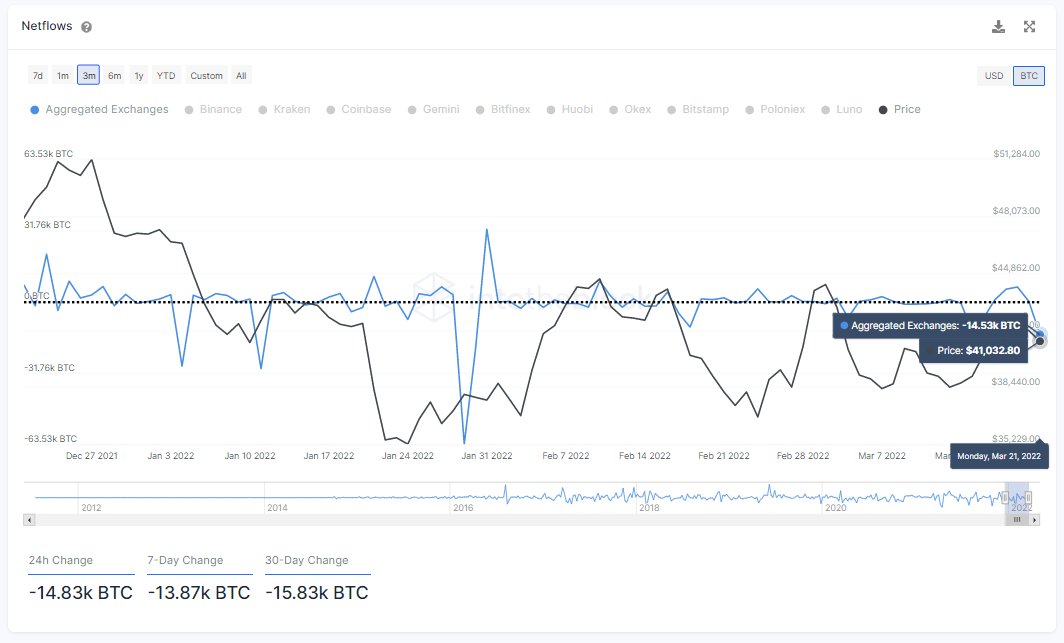 The case for a BTC bounce is bolstered by the fact that lower token supply usually makes for higher prices. And with a large amount of tokens being taken off active exchanges, BTC supply is bound to come down, supporting prices.

Crypto sentiment still on the ropes

Even with recent gains, sentiment towards the crypto market is largely constrained. The economic ructions from the Russia-Ukraine conflict are a key detractor of optimism, especially with inflation set to surge in their wake.

While Bitcoin dodged the initial market weakness from a hawkish Fed, it is eventually also expected to come under pressure from tighter monetary policy this year. The token has faltered at the $44,000 level several times this year, and has stuck to a tight range for a month.

still just ranging until we see a daily close above $45,500. If we break that then it could be the start of a much bigger break out.

Stablecoin Cashio plummets by 100% due to infinite mint glitch