Bitcoin stock-to-flow (S2F) creator PlanB believes a $98k target for the cryptocurrency by November end is a realistic goal.

Back in June, when Bitcoin was below $34k, analyst PlanB put out a list for his targets of the crypto in the subsequent months.

The tweet had these targets for BTC: Aug >47K, Sep >43K, Oct >63K, Nov >98K, and Dec >135K. So far, all these price goals have been decently accurate. But the real challenge will be the current month of November as the target for it is quite bold.

PlanB has used the stock-to-flow model for the predictions. S2F is based on the ratio between the current supply (stock) and the annual production (flow).

The S2F value shows how scarce Bitcoin is at a particular time. Based on this scarcity, the model uses a formula to predict the future price of the coin.

Here is the latest chart for this BTC price model: 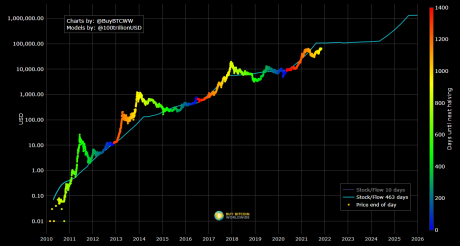 As the above chart shows, the model has been remarkably close to the real thing so far, although there were a few points of deviation.

Now, despite the apparent accuracy, some people in the community think the $98k BTC target for November set by PlanB is unrealistic, citing that the jump is quite large.

More people have raised concerns about the target in replies to the tweet, bringing up an important point that the market cap was significantly smaller during the previous times when BTC showed a similarly large monthly jump in the price.

At the time of writing, BTC’s price floats around $65.5k, up 6% in the last seven days. Over the past thirty days, the crypto has amassed 18% in value.

The below chart shows the trend in the price of Bitcoin over the last five days. 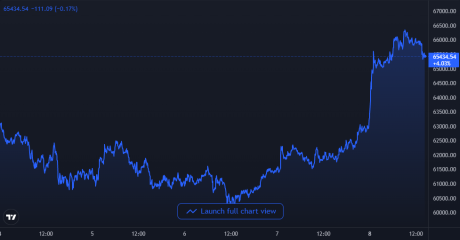 After going through consolidation for a couple of weeks, Bitcoin has finally shown a solid move up as the coin retouched $66k today.

This month will be a decisive test for the validity of PlanB’s S2F model as some people have raised concerns about whether the $98k target is actually achievable.