Small cap altcoins have been one of the best performers in recent times. Even through the downtrend, these low market cap cryptocurrencies have returned better gains compared to their bigger counterparts like Bitcoin and Ethereum. They have carried this performance into another week as small cap altcoins show their profitability once more by being ahead while the rest of the market suffers.

The monthly performances of these indexes are stark when placed side-by-side. For example, the Small Cap Index has been on the rise for the month, reaching as high as 17% in positive returns this month. However, the other indexes which consist of cryptocurrencies with much larger market caps have not been able to record the same returns, all down in the same time period. 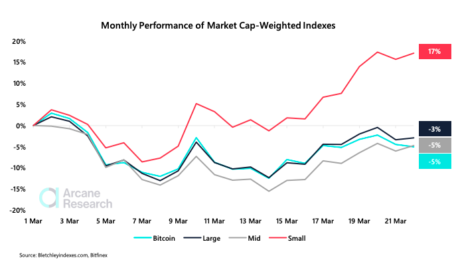 This index climbed as high as this after hovering around 0% for the days leading up to March 16th. It was at this point that the Small Cap Index had begun to pick up momentum, becoming the only index in the green.

How The Bigger Indexes Have Performed

Looking at the Bitcoin, Mid, and Large Cap indexes, it is obvious that smaller altcoins have been the best investment in recent times. All of these have remained in the red even after a small recovery that was recorded recently in the market. These indexes have remained below the mark of profit for the better part of the year, making them a less attractive investment option compared to the small cap altcoins.

Bitcoin has been on a downtrend, recording one of the highest loss margins for all of the indexes. It recorded 5% losses alongside its counterpart, the Small Cap Index, which also saw returns in the negative at -%5.

As for the Large Cap Index, it performed a bit better compared to Bitcoin and Mid Cap but still did not make it into the profit territory. It also remains in the red region with -3% recorded over the past month.

Ethereum however has been one of the strongest performers and has since its market dominance gone up by1% over the past week. Relative to Bitcoin, the ETHBTC is now back above 0.07.

Bitcoin holds above $41,000 over the weekend, Tether shows bullish signs