Is it hilarious or cringe? Opinions vary. One thing’s for sure, however, it captured the masses’ attention and got eyeballs on the Lightning Development Kit project. So, it definitely worked as a marketing tool and the Bitcoin community should cherish it. Even though the Spiral team says that the main layer is too slow, “sucks,” and it’s “painful to use.” Nothing could be further from the truth, layer one does perfectly what it needs to do. If you want speed and ease of use, just go up to layer two. That’s where the LDK lives.

The project’s documentation defines it as:

“Lightning Development Kit (LDK) is a generic library which allows you to build a Lightning node without needing to worry about getting all of the Lightning state machine, routing, and on-chain punishment code (and other chain interactions) exactly correct. LDK tends to be suitable for use cases where a degree of customization is desired, e.g. your own chain sync, your own key management and/or your own storage/backup logic.”

On the Lightning Development Kit’s introductory page, they promise the product was “designed from the ground up to be easily customized to your application needs.” Also, it’s “as lightweight as you need it to be and optimized to run on all embedded devices such as mobile phones, IoT devices, PoS terminals and more.” Plus, and this is very important, the use the Muun approach and help you create a single wallet experience. What does this mean?

“No need to create separate Bitcoin & Lightning wallets, forcing users to backup an additional recovery phrase. Instead, we let you define your own wallet and create one unified experience.”

What’s Spiral BTC And What Else Do They Do?

The company used to be called Square Crypto. When Jack Dorsey abandoned Twitter to focus on other ventures, it change its name to Spiral BTC. The aim was to convey better what their mission is all about. “Bitcoin is the best money. It should be used like it. We build and fund free, open-source projects aimed at making bitcoin the planet’s preferred currency.” When all of this happened, our sister site Bitcoinist gave us the 411:

“The year is almost at its close and as such companies have begun to make plans for the coming year. For Spiral, the year 2022 will be a year of expansion as it will be working on a number of projects in the new year. To do this, Spiral (formerly Square Crypto) plans to double the number of full-time developers in the coming year.
Some of the projects the devs will be working on include the Lightning Development Kit (LDK), the Bitcoin Development Kit (BDK), the grant program, and the Bitcoin Design Guide and Community.“

That’s right, they sponsor the fantastic Bitcoin Design Guide and already released a Bitcoin Development Kit for those who wish to build on layer one. They also give grants to Bitcoin developers, designers, and great projects like BTCPay Server, Lightning Signer, The Eye of Satoshi, and the widely used Mempool. 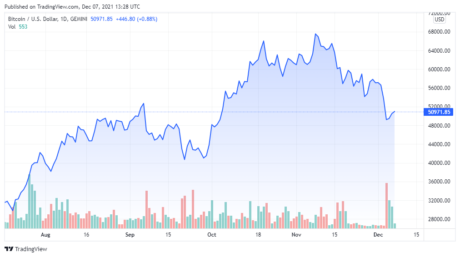 As soon as the rumor of Jack Dorsey leaving Twitter hit… well… Twitter, Bitcoinist ran a piece that praised his contributions to the space and speculated on what he would do next:

“The allegedly soon-to-be former Twitter CEO is perhaps best compared to Hal Finney in terms of the positive impact he has had on the cryptocurrency ecosystem. Both of have famously tweeted about “Running Bitcoin,” and both are now names nearly as synonymous with the top ranked crypto asset as Satoshi Nakamoto themselves.
Finney’s legacy has sadly ended, but could Dorsey’s truly just be at the very beginning in terms of what the business entrepreneur could bring to the overall Bitcoin ecosystem?”

Before that, Jack Dorsey’s other Bitcoin-focused company, TBD announced its first big project. The tbDEX will be a decentralized exchange and liquidity protocol. When the company released the whitepaper, NewsBTC reported on it and described the project as:

“The tbDEX aims “to build bridges between the fiat and cryptocurrency worlds,” that much is clear. We still live in a Fiat world and, if Bitcoin is going to succeed, we need new, simpler, and cheaper ways to interact with said world. “There are serious challenges to realizing this vision. Fiat rails are regulated, and no interface with either the traditional monetary system or “real world” can be completely trustless.”

At the Bitcoin 2021 Conference, Jack Dorsey said “Bitcoin changes absolutely everything. I don’t think there is anything more important in my lifetime to work on”. And now, he’s laser-focused on it. Things are moving fast since he left Twitter. It wouldn’t surprise us if the tbDEX releases a working version soon. They didn’t announce any timeline, though. Only one thing’s for sure. When the decentralized exchange is ready for the world to see, TBD should use Jack Dorsey’s puppet to promote it.

Defiance ETFs' NFT-Linked ETF Soon to Launch in the U.S.