The Bitcoin remittance business is blowing up all over the world. South African financial website moneyweb brings us the report directly from the oldest continent. The conditions that led to El Salvador making Bitcoin legal tender are present all over Africa. The people are unbanked but everybody has mobile phones. Plus, the diaspora is huge and sends money home constantly while big companies rob them blind with high fees.

“The African continent has many opportunities for widespread Bitcoin adoption. One of those opportunities is remittance fueled by Africa’s growing ~mobile~ population. There are over 30 million Africans living outside their countries of origin. Since 2012, the African Union considers the African diaspora the sixth Africa’s region.”

On one hand, “countries such as South Africa, Nigeria, and Kenya” want to regulate bitcoin and other cryptocurrencies. On the other, “According to the World Bank Global Findex, 60% of the population” in the continent are unbanked. The recipe is there. And Bitcoin remittances might be the use case to bring mass adoption to Africa.

Not only is the mobile population growing, but the whole continent also has ample experience with other forms of “mobile money.” It’s a concept already entrenched in the culture:

“Africa is the global leader in mobile money usage. Sub-Saharan Africa has the fastest growing mobile money industry in the world. The region will continue to see substantial growth in the number of people owning mobile phones. Mobile subscribers in Sub-Saharan Africa are projected to reach 623 million by 2025, half of the continent’s population. The figure will be even higher because of mobile phone sharing culture.”

From there to using Bitcoin, the most efficient money network in the world, it’s just a step. The road is clear.

Inadvertently, governments all over the African continent are pushing Bitcoin adoption with their restrictive policies. For example

Everyone underestimates the rate of #Bitcoin adoption in Nigeria, it will be a major religion soon.

What have the Nigerians done? Turn to Bitcoin remittances, of course.

“In Zimbabwe, several restrictive monetary policies have led to the growing interest and use of bitcoin for remittances. First, the government banned all foreign currencies such as the US dollar, Euro, South Africa rand, and others. The government also placed restrictions on mobile money services, as well as daily withdrawal limits because of severe fiat currency shortages. To bypass these restrictive policies by the central bank, a growing number of Zimbabweans prefer bitcoin remittances to fiat money.”

This factor wasn’t present in El Salvador, which is a dollarized country. However, in Africa, there are several “countries that experience double-digit inflation such as Zambia, Zimbabwe, Nigeria, Sudan, South Sudan, Ethiopia, Liberia, and Sierra Leone.” For example:

“The Guinean franc is one of the world’s weakest currencies as we launch into 2022. In 2020/21, the Zambian kwacha and Zimbabwe’s dollar were one of the worst performing currencies in the world. The Nigerian naira has lost more than 50% of its value since 2015. The Central Bank of Nigeria devalued the naira thrice in 2019. In May 2021, the central bank devalued the naira by 7.6%.”

Who said Kenyans don’t own #Bitcoin..

The remittance fees were a prominent factor in the El Salvador story. And in Africa, the story repeats itself:

“A study by the World Bank shows that transfer fees to Sub-Saharan Africa, the poorest region in the world, are the highest in the entire world. The cost of sending $200 to Sub-Saharan Africa towards the end of 2020 was 8.2% on average. Sending money within Africa is even more expensive.”

What will the whole Sub-Saharan Africa do?

I could wait another 25 years for the ANC to do good on their promises to fix some of historical injustice in South Africa, or I can take control of my own life and buy #bitcoin now.

This is a positive one, for a change. According to BTrust’s Abubakar Nur Khalil, in a recent article for Bitcoin Magazine:

“Africa is home to more than a thousand indigenous languages, with non-English speaking countries. The majority of Bitcoin material available is in the English language, which means we must also engage in translation efforts to unlock knowledge for millions of non-English speakers on the continent, both on the developer and user front.

Currently, there are efforts around Africa to translate Bitcoin material into different languages such as Amharic, Arabic and Wolof by Kal Kassa, Arabic_HODL and Fodé Diop, respectively, with ongoing work on others.”

And we also have to mention Exonumia, who is “creating open source African language translations for Bitcoin literature through community.” And, of course, the BTrust. The organization created and financed by Jay-Z and Jack Dorsey is on a mission to promote Bitcoin development in Africa and India. One of its board of directors members, Abubakar Nur Khalil, recently spoke to Bloomberg Technology about the initiative.

Meet one of the board members of Jay-Z’s and Jack Dorsey’s blind Bitcoin trust: Recursive Capital CEO Abubakar Nur Khalil in Nigeria. He tells @sonalibasak how he envisions web3 in Africa https://t.co/IdyBB7wTvb pic.twitter.com/eFKEga4Nbg

Conclusions And The Market

There are negative factors that affect Bitcoin positively, like high fees, weak currencies, and worse government policies.  And there are positive ones, like high mobile adoption and available education. The mix might form a perfect storm for Bitcoin adoption in Africa. And the Bitcoin remittances revolution is leading the way. 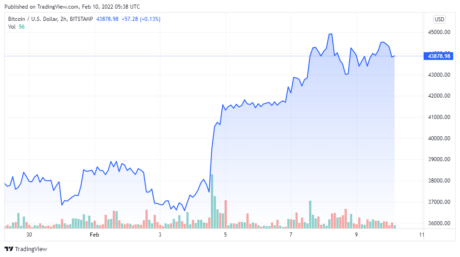 After a recent surge of sorts, Bitcoin has been trading horizontally for the last few days.

Will Ripple (XRP) Price Advance Towards $0.87 After Recent Stellar Performance!