Axie — which is at the forefront of the “GameFi” trend — has already generated more than $2.5 billion in trading volume. According to DappRadar, 51,000 daily active wallets (last March) were connected to gaming-related contracts in the blockchain ecosystem.

Three months later, that figure had skyrocketed to 359,284 — a 599% rise. Since then, the protocol went on to achieve impressive figures. In August 2021, it hit the $1 million mark. Moreover, in Q3 alone, Axie Infinity amassed $2.08 billion in trading volume or 83% of the game’s historical trading value.

The gaming platform exploded in popularity this summer following the launch of Ronin, a custom sidechain that enabled speedy, low-cost transactions. Now Ronin has picked up added utility with the rollout of its own decentralized exchange (DEX).

Enter Katana, a DEX that runs natively on Ronin, making it easier for Axie Infinity players to swap tokens directly on the sidechain itself. Upon its official launch, users will be able to trade between AXS, SLP, USDC, and even WETH. Nonetheless, it’s surging regardless of its recent inception. Here are some impressive statistics:

“Axie Infinity officially launched Katana DEX on its ethereum sidechain Ronin, which has reached $163.23million. The transaction volume in the past 24h is close to $150million, with more than 170,000 transactions.”

The chart below highlights the aforementioned feat. 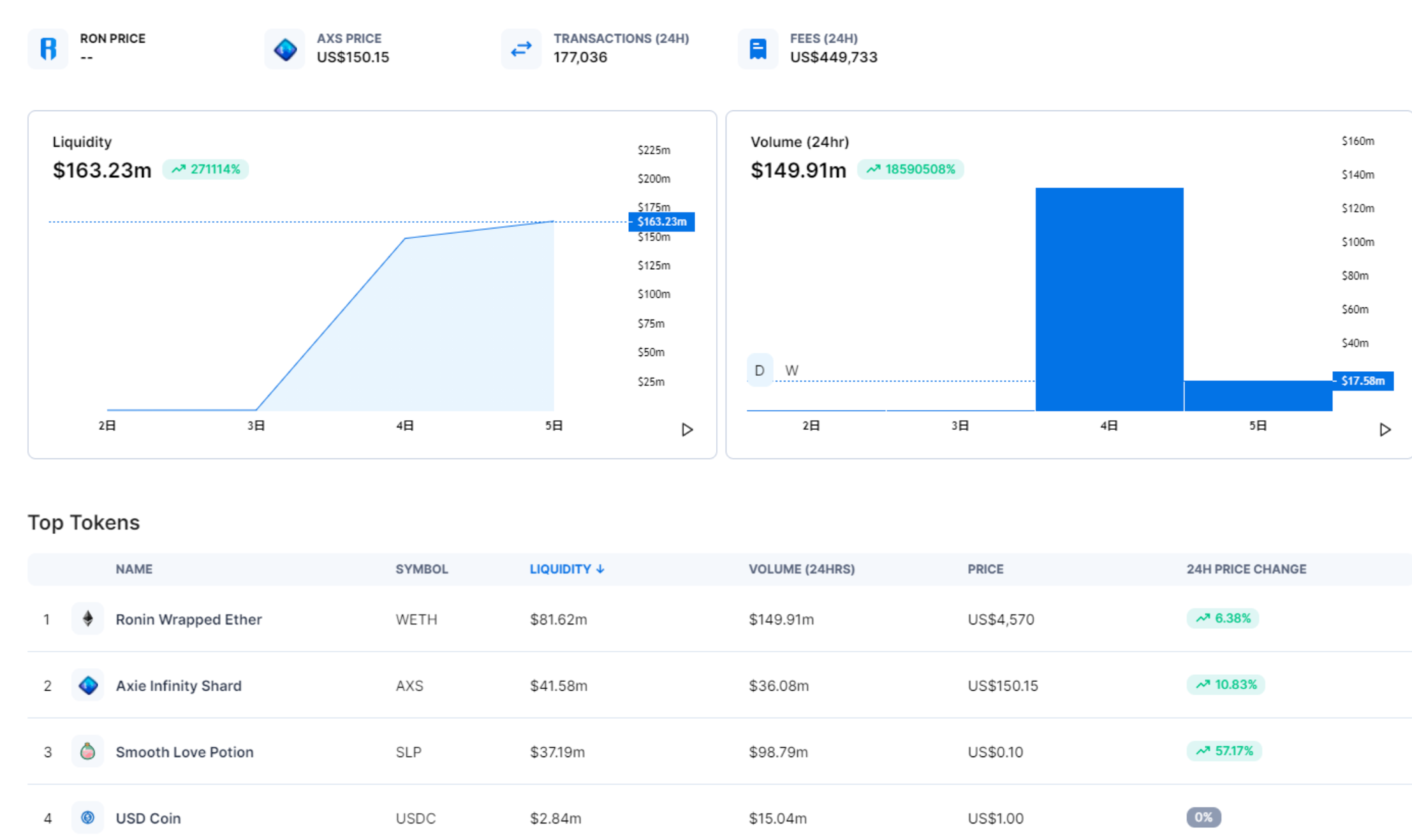 At press time, those metrics reached $839m in liquidity (365% increase). However, the transaction volume witnessed a setback, dropping to $145m in 24 hours. Nevertheless, the DEX in question continued its march on the DappRadar top DeFi Dapps chart. As per this, it stands at the #2 spot. DappRadar noted:

“(Even more impressive) Katana has managed to surpass big names in the DeFi sector like Raydium, 1inch, Uniswap V3, ApeSwap, and SushiSwap. This is a remarkable success, even if expected, considering the enormous community Axie Infinity has created. At the moment, only BSC-based PancakeSwap has managed to outperform Katana.”

Clearly, the new Ronin-based Katana DEX is attracting waves of attention from Axie fans. Even before the said initiative, Axie Infinity racked some significant figures as well. Consider the tweet below.

In the past 30d, Axie Infinity continued to lead the way with $190.9 million in revenue from Dapps. With the cooling of the NFT market, dYdX surpassed OpenSea with 30d $66.9million in agreement income. pic.twitter.com/Agg0CgYG8y

RON is the ecosystem token for the Ronin chain. It will reportedly someday power all transactions being made on the DEX. With the introduction of Katana, users will be able to swap and trade assets even without having to ever leave the ecosystem. RON’s primary purpose is to ensure that Ronin will always be a blockchain owned by the community.

“The success of Ronin so far has been a direct result of our amazing community.”

Well, this certainly was the case. Different members of the community expressed their bullish narratives concerning this platform. A user tweeted as below:

This should be the playbook for how to execute crypto product launches. Seamless.

Katana (Ronin DEX) has a great UI, great branding and easy to use. Well done to the whole @AxieInfinity team ❤️

Well, to sum it up: The sheer performance of this ecosystem has managed to stun almost everyone from the community. No wonder, it holds a bright future.