The cryptocurrency market has taken a hit today. Following the entry of Russian ‘peacekeeping’ forces into the Ukraine, its total value has declined by 6%. Major coins such as bitcoin (BTC) and ethereum (ETH) have dropped by similar percentages. Meanwhile, no coin — save some stablecoins — is up in the past 24 hours. However, falls generally set the stage for rebounds. As such, we’ve put together a list of the 5 best cryptocurrency to buy on low prices right now. 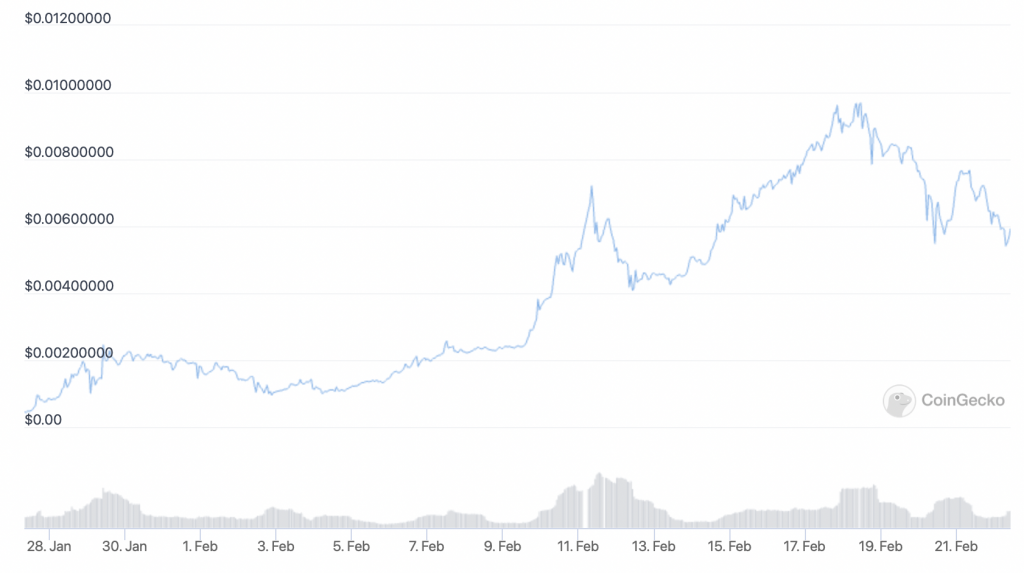 Despite the correction, LBLOCK continues to be one of the most promising new altcoins in the market. It’s the native token of the Lucky Block lottery platform, which is based on Binance Smart Chain. It has now racked up 38,000 holders, with this growth driven largely by forthcoming release of the beta version of its app.

Many of you have been asking about the Beta Testing for the Lucky Block App and we have an important announcement to share.

The release of the beta testing version of the app will now take place on 07.03.2022. pic.twitter.com/P9bEVQkXhF

Starting from March 25th, Lucky Block will hold regular lottery draws. Interested parties can enter by purchasing tickets using LBLOCK, with entrants having the chance to win 70% of each lottery’s jackpot fund. Meanwhile, 10% of each fund will be shared equally among all LBLOCK holders, regardless of whether they enter or not. It’s this system that has generated buzz around the coin, with Lucky Block itself recently boasting that it’s the “fastest-growing cryptocurrency in history.”

$LBlock is the fastest-growing #cryptocurrency in history 🔥

That’s right, we hit 1 billion market cap faster than #ADA, #BNB, #ETH, #SHIB and all the other #cryptocurrencies!

Currently, investors can trade LBLOCK on PancakeSwap and on the LBANK Exchange. More listings are likely to follow, meaning we can expect further price rises once the market settles again. 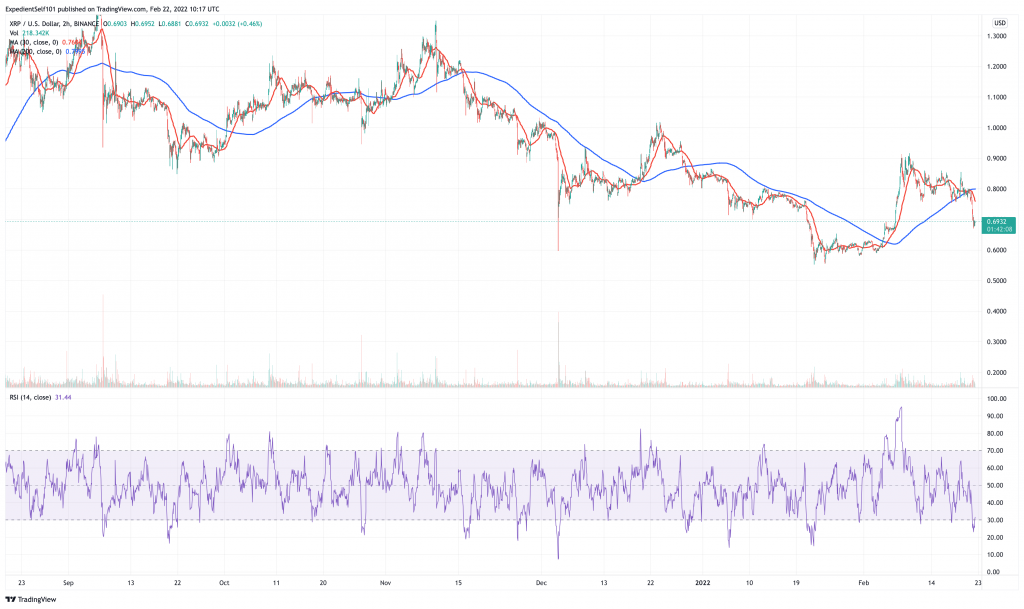 XRP’s chart shows that now is in fact a good time to buy. Its relative strength index (in purple above) is under 30, signalling that it’s undersold. At the same time, its 30-day moving average (in red) has dropped below its 200-day average (in blue). Once this fall bottoms out, we can expect a strong rebound.

More broadly, XRP could benefit from a big jump in the not-too distant future. This obviously depends on the outcome of Ripple’s legal battle with the SEC, for which Ripple remains confident it will emerge favourably. Indeed, it recently signalled its confidence by buying back its own shares at a valuation of $15bn. This buyback indicates that it’s planning to hold an initial public offering once the case has ended, something CEO Brad Garlinghouse has previously discussed.

Recently unsealed documents also reveal that, in 2012, Ripple took legal counsel from the same firm that helped draft SEC speeches regarding cryptocurrencies and securities law. In other words, Ripple believed that it was acting in accordance with SEC guidance, meaning it had no fair notice that it was violating securities law.

But my wife looked at it this afternoon and thought of something I hadn’t thought of: that the guidance Ripple followed back in 2012 is PERFECTLY in-line with the Hinman speech. She then argued it so well that I made her do a video with me. Poor thing.

However, with the cases discovery period not likely to end until March, investors will have to wait a while longer for any payoff. But when it comes, XRP is likely to jump massively. This is why it’s one of our 5 best cryptocurrency to buy on low prices.

There’s no silver lining in this ruling granting the SEC extensions of time – even if the order on the Motion for Reconsideration is eventually upheld.

Now discovery won’t conclude until March at the earliest.

DOT’s indicators are similar to XRP’s, which isn’t surprising given the marketwide dip today. Still, they reveal that now is a good time to buy if you’re looking to snag altcoins on the cheap.

As for fundamentals, DOT’s have long suggested a big, long-term rally. Its native platform, Polkadot, is one of a handful of very promising layer-one blockchains. It has been hosting auctions for parachain slots on its main chain since the end of 2021. These will decide which projects join Polkadot’s overall network, with the implication being that this network with a thriving ecosystem once they’re all finished.

HydraDX will be onboarded at block #9,388,800 [roughly March 11,2022] at the beginning of lease 7 with the other winners from auctions 6-11. Over 5.3K network stakeholders locked up DOT in favor! pic.twitter.com/x3wMkMDKA9

Increased usage of Polkadot means more DeFi activity and, most importantly, more demand for DOT. Indeed, certain analysts believe DOT could be one of the biggest coins of 2022.

DOGE continues to slump that has lasted for several months, leaving it 82% down from its all-time high of $0.731578, set in May. Still, it remains the biggest meme coin in the market, with a large throng of diehard supporters. Indeed, its Reddit page now counts some 2.3 million subscribers.

Then there’s the fact that DOGE continues to receive support from Tesla and Elon Musk. Last month, for example, Tesla began accepting payment in DOGE for some of its merchandise.

You can now purchase select items on Tesla Shop in Dogecoin…exclusively in Dogecoin!https://t.co/I4jSgwJZ5O

And with DOGE also witnessing some institutional investment last year, there’s every chance it could rally strongly once the market picks up again. That’s why it’s one of our 5 best cryptocurrency to buy on low prices. 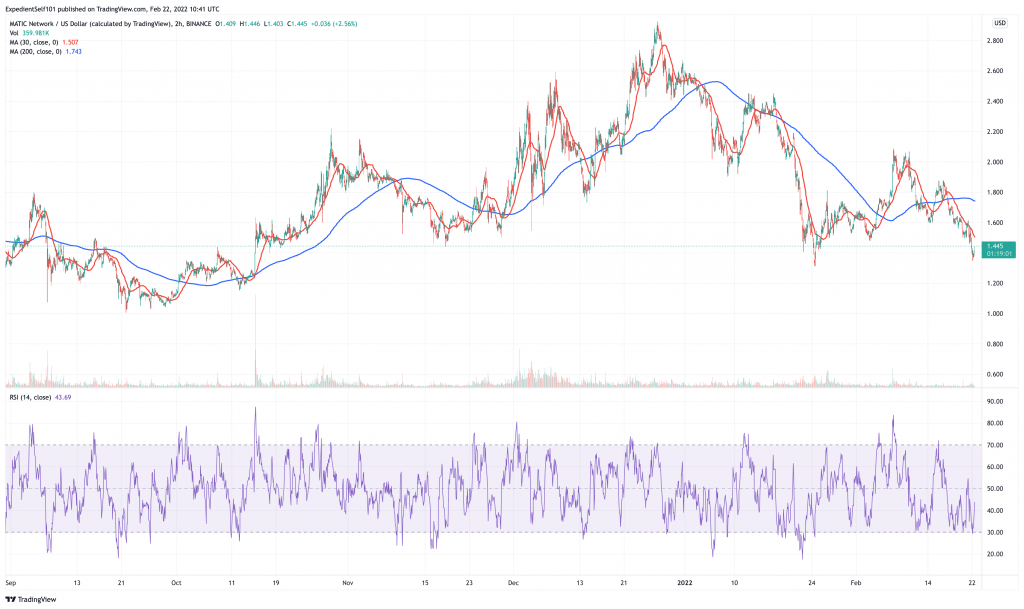 MATIC’s 30-day average looks like it’s about to hit a bottom with regards to its 200-day average. Put differently, it could be on the cusp of a rebound, seeing that it may have fallen far enough.

MATIC is the native token of Polygon, the largest layer-two scaling solution for Ethereum in terms of total value locked. In fact, at $4 billion, it’s bigger than many layer-one blockchains. Its general growth is also very impressive, with the protocol now counting nearly 350,000 daily active users, as well as 3.5 million transactions per day.

And with Ethereum not likely to switch to proof-of-stake for a while yet, Polygon is likely to continue growing for the foreseeable future.