In every sport or form of competition, we see established rivals come to life. In basketball, it’s the Lakers and the Celtics, in boxing we’ve seen the likes of Furry vs Wilder, and in hip-hop, we often hear about Nas vs Jay-Z. Today in the world of crypto we have had a melting pot, stuffed with all kinds of herbs brewing a beef.

One that was widely recognized, but that has slowly begun to fade is Ethereum and Cardano. Let’s take a look into the history of these blockchain giants.

What’s Beef: The History Of Ethereum and Cardano’s Connection

These two big dogs have a lot in common, and plenty of differences too – but the overall goal is to be on top of the blockchain in the end.

Ethereum was created with the intention of becoming a global, open-source platform for custom assets and new kinds of economic applications. Considered to be one of the most ambitious blockchain projects to date, Ethereum seeks to leverage blockchain technology to decentralize products and services in a wide range of use cases beyond money. To date, Ethereum has seen a few distinct phases that have emphasized different aspects of its capabilities. In 2021, Ethereum solidified itself as the firm #2 player in crypto behind Bitcoin.

Cardano’s primary use case is to allow transactions in it’s native cryptocurrency, ADA, and to enable developers to build secure decentralized applications powered by it. However, Cardano differs from other blockchain projects by emphasizing a research-driven approach to design, aiming to achieve an academic rigor it believes will propel adoption of its technology. 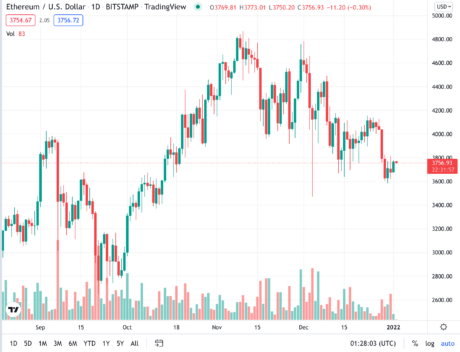 Invisible Strings & A Forgotten Past…

The founder of Cardano, Charles Hoskinson, started his blockchain journey in 2013. He founded an online school, called the Bitcoin Education Project, where he stumbled upon Ethereum’s own Vitalik Buterin. Not much longer, he became one of the eight original co-founders of Ethereum. After some dispute over whether Ethereum should become for-profit, Charles left Ethereum in 2014.

What makes this a real beef is not the fact that Charles left Ethereum, but how the marketing of ADA was directly targeting Ethereum. Dubbed the “Ethereum-killer,” ADA made a name for itself for quite some time as the coin to look out for. Many investors have been waiting for Cardano to take the thrown, but Ethereum has just stayed elating and on the rise – despite obstacles such as high gas fees.

Ethereum was blessed with the early start, and that has helped cement them in the position the blockchain is in today. The problem with ADA is the large amount of frozen contracts and staging drops; they face a wall of trying to get over the hump so they can finally do what many have waited for.

ADA has many game changing ideas, and contracts that can improve and help push the crypto further. Both ADA and ETH continue to have beef, but other emerging tokens have challenged ADA’s position lately as well.

Despite all of this, these two coins have been hot topics and coins to watch throughout the year, with both reaching all-time highs. Next year, and the years to come will be exciting as we find out who will go and who will stay. What’s beef!?

Is Bitcoin on the Verge of Forming the Bottom?